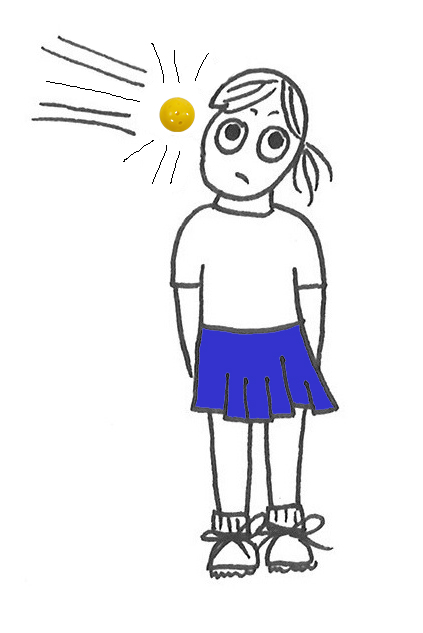 Tagging is hitting an opponent on purpose to win a point. The knee jerk reaction at nearly all levels of play is “Tagging is just part of the game.”  And, of course, hitting opponents with hard shots is part of the game.  I have been hit many times.  Conversely, I have nailed good friends in the sternum many times myself.

But last week was a different experience altogether.  My normal tactic if I spot an opponent at the kitchen line during a dinking rally with said player’s paddle at waist height or lower is to wrist flip any slightly high ball at the center of the torso.  Last week I spotted a new woman player (an aggressive 3.5) with her paddle down low, so I ripped a nice high ball with a hard topspin forehand right at her sternum.

And nailed her in the face!  Her glasses went askew, and her eyes wobbled.  Her paddle fell to the court.  I was horrified and apologized profusely.  She said she was okay and resumed pickleball play after a drink of water.

In the very next rally, I thumped her in her tummy as she ran forward to the kitchen with her paddle below her waist.  I felt like a complete jerk, but I had not consciously thought about hitting her.  I saw an opening and my subconscious took its best shot.

This gal did not play for five days, and when she did, she showed me the faint remnant of a fairly decent black eye!

Is it okay to power a juicy poach at your opponent’s chest?  But is it not okay to “go headhunting”?  Do you apologize every time you hit an adversary, even in a tournament?  What do you do when an opponent nails you?

What is your opinion about tagging or hitting an opponent?

164 thoughts on “Hitting an Opponent”