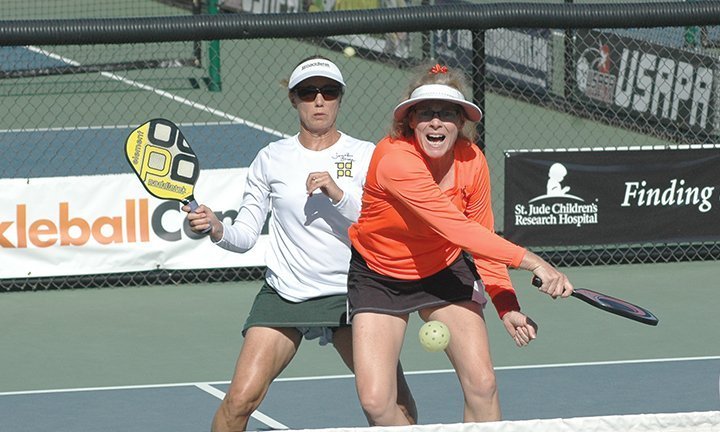 Alex Hamner and I made the cover of the January/February 2017 Pickleball Magazine. We are honored and keep laughing at the photo that made the cover. We both vividly remember that point and can’t believe that that ONE moment in time was captured on film! We thought you’d like to hear how that photograph actually happened.

Some funny things about that Pickleball Magazine cover photo come to mind.  One is that both of our husbands, who rarely see us play – much less both together at the same tournament – were there for that match.  Priceless.

Also, I love those gals we were playing (Rachael Kroog and Julie Haney) – they were both playing well and we were having a good match. Actually it was too close in my opinion!  This point in particular is well-remembered because I jumped on the high ball in the middle and actually got to the ball before jennifer – that doesn’t happen too often!  And then I didn’t put the ball away, which made me mad – and because it came back I had the opportunity to hit it again (and even harder).  And wouldn’t you know it – it came back AGAIN.  So now I was just, well, really ticked off!  By this time I had hit the ball 3 times, cutting Jennifer entirely out of the point, while completely traversing the kitchen line before exiting off the right side of the court.

After winning the point (finally!) I recall Jennifer making some silly comment like we always do – “ya-huh, way to get that ball, Tiger”.  And we laughed about the whole scenario. Even laughed with the spectators at that moment.  So dang fun playing pickleball!

This photo is the middle shot of my 3 poaches – I know from my position on the court and the aggression on my face!  And Jennifer’s look of “whoa, what demon took over Alex’s body??”  I laugh out loud every time I see the picture.

All I remember on this point was all of a sudden Alex was SMACK right in front of me finishing up the point nicely. I was totally surprised and was glad I was out of her way. I did say something right after that point, something like Way to go Tiger!!  We both busted out laughing…  Later that night we reminisced about the day’s play and this one point was clearly in our minds. I said – “do you remember that point you just took over like a mad woman?” We laughed and never ever thought that moment would have been captured on film…  let alone the cover of 2017 Pickleball Magazine.

The photo was taken at Nationals VIII on Open Doubles day in Casa Grande, Arizona.

10 comments on “Cover of 2017 Pickleball Magazine”