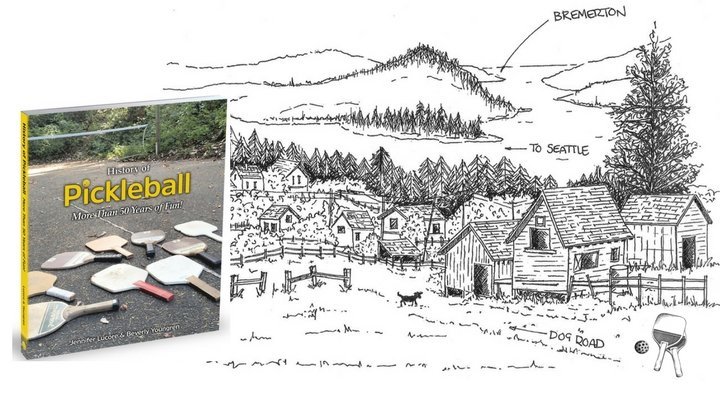 Yes, the first ever history book on the sport of pickleball is finally done! This three-year journey with my mom (co-author Beverly Youngren) has definitely been a challenge but we did it – Hellooooooo

History of Pickleball – More Than 50 Years of Fun!

If you’ve volunteered to make this sport run, this book is because of YOU.

Here are excerpts from the Introduction Chapter of History of Pickleball – More Than 50 Years of Fun!

In June 2015, at the inaugural USAPA Ambassador retreat in Lake Tahoe, CA, Jennifer and Beverly had a blast interacting with more than 140 Ambassadors who traveled from all over the US and Costa Rica. During a lively lunch conversation with the new ambassadors, it became apparent that many didn’t know much about the “pickleball pioneers” who had been so instrumental in championing the sport.

During their 6-hour mother-daughter road trip home after that retreat, they realized that there was so much to the pickleball story, yet there was no single source for those who, like them, were intrigued by it. On that trip home, they decided to write a book about pickleball’s beginning: its pioneers, its characters, and its early growth. It became their “calling” to capture the stories of the beginning of pickleball before those memories were lost forever.

Another important factor, and quite frankly one of the primary reasons it made sense to attempt this feat, was the relationship Jennifer had developed with Barney McCallum starting back in 2012 as Pickle-Ball Inc.’s first sponsored player. She had the unique opportunity to occasionally meet with Barney, do lunch, and just talk pickleball.

They knew it would take Barney’s input to pull off this book. When Jennifer first discussed the idea with him, Barney was both excited and supportive; he lit the flame for her and steered her passion for searching out the history. On several occasions, Jennifer’s doubles partner, Alex Hamner, and she sat around the table with Barney at his cabin on Bainbridge Island, sharing a drink and listening to his fond memories and observations of the evolution of pickleball. His recollections and timeless stories are priceless and, of course, shared throughout the book.

They have taken trains, planes, ferries, cars, RVs, and even bicycles to hunt down the stories, facts, and memories. Through countless interviews, emails, and in-depth research, they know they have dug deep. They know that you’ve seen bits and pieces about the history of pickleball on websites, YouTube, newspapers, magazines, blogs, books, and even TV coverage. But NONE tells the whole story.

Jennifer and Beverly have been allowed access to the founding families’ private archives and had interviews with legendary players who described the historical trends that have shaped the game. They were constantly reminded how wonderful it was that people freely shared their stories and time with them; for that, they are forever grateful.

If any of you reading this have volunteered to teach or promote pickleball in some form or fashion, then YOU are part of the sport’s growth. Whether a flat spot on a cul-de-sac, an asphalt lot, an unused tennis court, or a quiet gymnasium, each is an example of where volunteers introduced pickleball to others. Every community, town, and recreation center has a pickleball story, and it probably started with a volunteer introducing pickleball to others on whatever space they could find.

To purchase this book, visit Amazon.com

12 comments on “History of Pickleball – More Than 50 Years of Fun!”

Lunchtime with @alexpickleball. Yes, I know, we AR

SHOWTIME ⏰ in one hour. Join us on their Faceboo

International Zoom Call - WOW💥 that was fun! I