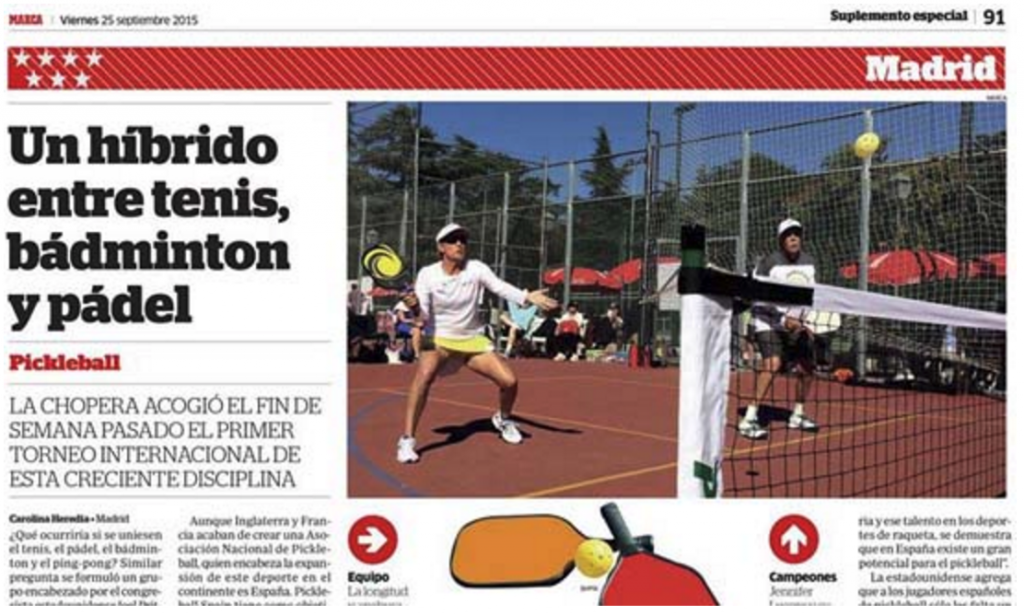 With players from 10 countries participating, the first annual
International Pickleball Tournament 2015 held in Madrid, Spain is now in the history books. This was an extra special pickleball adventure for me for many reasons, but a couple highlights include traveling to beautiful Spain and getting to play Pickleball in new place (country!), and I got to play with my dad (Bob Youngren) in mixed doubles and my mom (Bev Youngren) in doubles. The tournament, the venue, the players and the culture were the best! So many new friends; some with a language I don’t speak, but Pickleball became the universal language.

The International Pickleball Tournament took place at “La Chopera” sport center where 23 courts were set up. This sports center is located in Buen Retiro Park which is the largest park in the city of Madrid at 350 acres.  On the below video (Part 1 of 2) you can see how unique the park and venue are. Friday, September 18 was a practice day that included skill and strategy clinics run by me and my dad, as well as a referee clinic run by USAPA President David Jordan. Saturday was doubles and Sunday was mixed doubles. Tournament results can be found on the Spanish Pickleball Association webpage.

Mike Hess, the president of Pickleball Spain shared how the media has embraced this new sport. “Spain’s largest sport magazine called Marca published two articles on the tournament and pickleball’s growth in Europe. The first article announced the international tournament. The second article (see top photo) was published after the tournament and featured an action photo of father and daughter tournament Gold Medalists Jennifer Lucore and Bob Youngren, as well as an interview with Jennifer, who won two gold medals at the tournament.” It is always awesome when the local media shares the details of the sport we all love so much.

I hope you enjoy this video as it was fun to make and brought back some great, not to distant memories. Stay tuned for video and blog post Part 2 of 2 because there I’ll have personal interviews with players from 8 countries and they share why they like pickleball, plus more!!

Don’t forget to SUBSCRIBE to my blog – you don’t want to miss any pickleball news, lessons, updates and free stuff (I just gave away a free Paddletek paddle last month!)