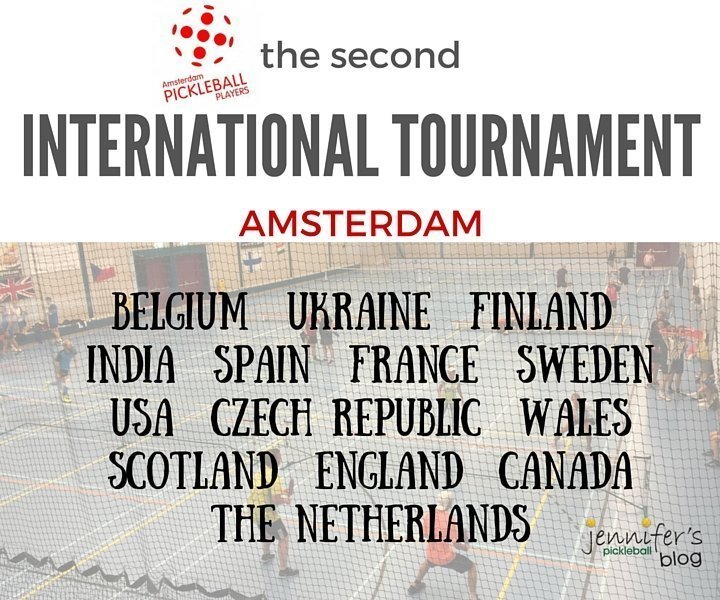 The 2nd International Pickleball Tournament 2016 held in Amsterdam, The Netherlands is now in the record books. Wow, the players from around the world were great! And, I had the opportunity to reconnect with several players from the International Tournament in Madrid, Spain (September 2015). So for many of us it was a pickleball reunion. The tournament held a few free clinics before game days taught by Kyle Yates, Jennifer Lucore, Seymore Rifkind and Gigi LeMaster. The clinics were a hit and were a great opportunity to interact from players blazing the pickleball trail in their corners of the world. Tournament directors Bernadette Snijders Blok and Carine Thesingh, and their volunteer student group did a fabulous job and shared that the “clinics were all a very good stimulation for pickleball in the Netherlands and Europe as well!”

Here are some fun facts:

Pickleball in Amsterdam is somewhat new. Bernadette shared that this was the third year of playing in town and she started with her and her friend Yolande, and they started renting the local sports hall – Sporthal de Pijp and now play is every Sunday afternoon with 5 to 6 courts full. They even have permanent pickleball lines on two outdoor playground courts. There’s also small play groups in the towns of Eefde, Melick, Haarlem and Utrecht; still small but growing. Pickleball in Amsterdam—what an awesome place to visit and play pickleball. When the next Amsterdam International is announced make it a goal to visit and get your pickleball fix in this exciting and unique city.

Stay tuned for a fun video of the 2nd International Pickleball Tournament 2016 – Amsterdam.