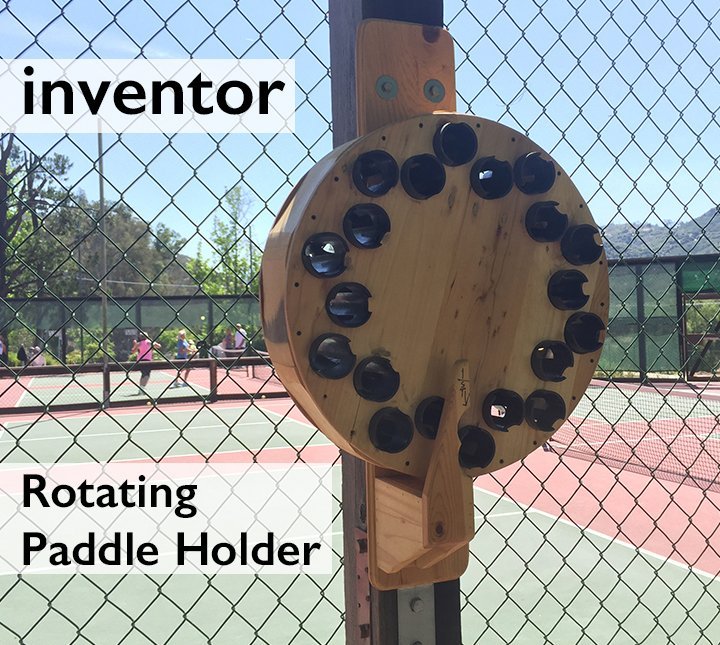 Let me introduce you to the inventor of this rotating paddle holder – Lon Jones! Many of us have encountered the challenge of open play and keeping track of who’s next up and who’s in line. Sometimes this is a juggling mess of moving pickleball paddles. Here Lon shares his custom creation – the rotating paddle holder; the solution to keep things (paddles) orderly and moving right along:

I have played pickleball in many places, and everywhere I went I saw the same problem with how pickleball paddles are retained to mark your place in line while waiting for a court.  People either stuck them in chain link fence, or had some sort of board that required them to manually move the paddle forward until it was their turn to play.  I thought there had to be a way to eliminate having to constantly move the paddles while not taking up a large amount of space.

What I came up with is a circular rotating design that auto-advances the paddles.  In just a 20-inch circle, you can put up to 20 paddles that rely on gravity to rotate them forward as people remove them to play.  Not knowing if this design would work or would even be well received, I didn’t want to use extravagant hardwood for the prototype.  I used reclaimed pallet wood, joined to make a panel so I could cut the 20 inch circles for the front and back of the rotating disc.  ABS drain plastic piping was the perfect diameter to make the holders for the paddles and gave the unit nice depth to hold the paddles horizontally.  One issue was how to make a stop for the paddles to rest against as they rotated around.  I solved this by extending some 1×6 framing with an upright to stop the paddles.  To hold the unit vertical and facilitate rotating, I reclaimed a lazy susan turntable bearing which allows it move quite freely while also being able to take the angular load of the paddles.  I then simply bolted the whole unit to the 6×6 post at the club to keep it in place.

This first design has been in place at Castle Creek Pickleball Club (Escondido, CA) for months now and really works well.  Feedback has been very positive after people got past the initial figuring it out.  They love that there are no more paddles falling out of the fence, and there is no need to move the paddles 10 or more times along a board to keep your place.  I have a feeling this will catch on in other places once they see how convenient it is to use!

I already have many changes to the design in mind for the next version, including a universal mount and stronger sealed bearings for longevity, as well as a more compact design.  Now it’s just a matter of finding time to make it!

I have been playing pickleball for over 2 years now and have reached the 5.0 level.  I am a board member at Castle Creek Pickleball Club and am always looking for ways to improve the sport, and the fun that goes with it.

Isn’t that so smart! Thanks again Lon for bringing the rotating pickleball paddle holder to life and keeping paddles and people moving right along. I think we should give credit where it due; how about calling it the “Lony Susan” or the “Lonlinekeeper”!   🙂  What are your thoughts?

16 thoughts on “Inventor of the Rotating Paddle Holder”