Here is one of a series of posts I will share from pickleball paddle manufactures. It’s nice to hear their story and some of the behind the scenes… First up – The Paddletek story.

A Husband’s Passion for Pickleball
By Kim Smith

To say that my husband is passionate is an understatement. This is a man that learned Italian so he could surprise me while I was in Italy to propose.  His passion lies in everything he loves, and when he discovered pickleball?… it was most certainly love.

At first it was a weekly game, but it soon exploded to at least three times a week for three to four hours each. This on top of a full time job and two young daughters was a lot to handle.  But for Cody, his passion for pickleball would win out.

I started noticing the amounts of paddles Cody was tearing through when I saw our Visa bill one month. “Ummm… honey?  Care to explain?”  A chuckle and an apologetic shrug told me everything I needed to know.  There was no going back now.  But it did set in motion a spark of an idea.  Cody’s engineering mind saw a problem it intended to fix: a longer lasting pickleball paddle.  At first it was to appease my concerns about the money spent on paddles.  His explorations would eventually create the brand of Paddletek paddles.

For a few months all I noticed was more frequent packages arriving on my doorstep, and the inability to park my car in the garage. It then spread into our home office, and eventually my dining room table.  My house had become a paddle making facility, all to appease a challenge that Cody saw before him.  His first paddles were rough, to say the least.  But every time he would come home from playing, he would make another paddle.  “What happened?” I’d ask.  “Yea, so-and-so wouldn’t give it back!” He’d reply.  My annoyance in the takeover of my house became pride and encouragement that maybe he was onto something.  It was like this for over a year, with Cody making as many paddles as he could after work and on the weekends.

Paddletek became less of a hobby and turned into a business with the addition of Cody’s brother Curtis. Curtis was able to gently take control of the production and build it into the amazing company it is today.

And the best part? Cody is still passionate about pickleball.  He still plays as much as possible.  And I get to eat in my dining room.

Paddletek was founded as a hobby business by my brother Cody Smith in 2011.   Then in October, 2012, after asking me for six months to partner with him, I finally said “yes”.  That is the point that I consider we actually began for real.  Prior to Oct. 2012 his sales were about 10 to 15 paddles per month and mainly to friends and fellow Pickleball players at his club in Fountain Hills, AZ.  In the 26 months since we got serious, we have grown to be the fourth largest US manufacturer of Pickleball paddles.  We have many new innovations and paddles designs we plan to launch.

Find all the Paddletek paddles here 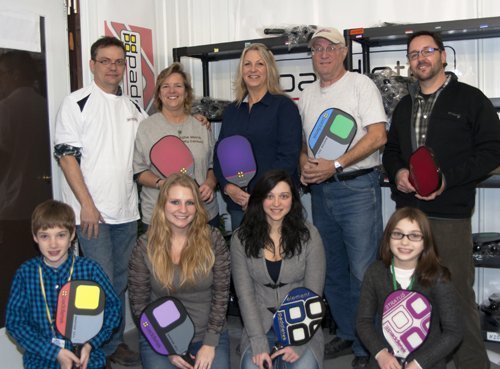