Today I woke up and thought…. Hmm, I am just going to show up at one of my two home courts and join in on pickleball open play. Open play means that all players, of any skill level, are invited to play on the courts for a set time frame (8-12 in this case). Most pickleball venues have open play as it allows players to come and go never having to actually set up games—or know anyone for that matter. Some venues have courts dedicated for “aggressive” or “competitive” and “non-aggressive” or “beginner” and “advanced” players. This grouping really helps the new players find comfort in getting out there. The comfort of playing with “like” players of similar skill and speed lends itself to fun and a more enjoyable experience. It is this aspect that I love.

Todays “regular” open play attendees made the observation that we may have broken the record on the amount of players that showed up. The last count was 60 players! Boy, did we get social and have some laughs. These courts are at Castle Creek Country Club in Escondido, CA. Years ago the country club had two rarely used tennis courts for guests and along came a handful of pickleball pioneers who made things happen and over time tennis went by the wayside and 8 permanent pickleball courts sprung up.

For those of you who know me personally, know how I love group photos. I enjoy documenting the fun play, people and places I go. Why? Because when I am really old I will enjoy looking back and saying “WOW I got around” haha.  So, as I looked around at all the friendly yet competitive players today I said to Peter (an energetic club board member) We need a group picture!  And luckily he said ok and helped me (easier said than done) round up all the players. Getting the players to actually stop play was funny, but I have found that most pickleball players are not photo shy and most everyone complied. Thanks! 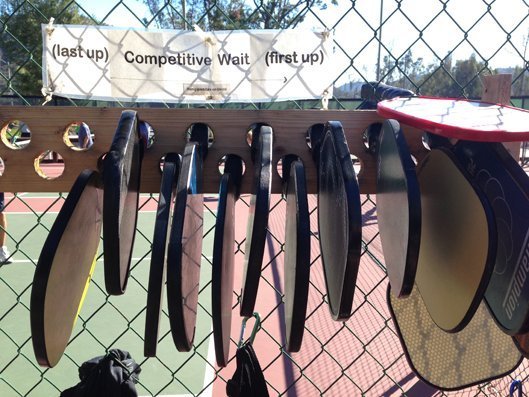