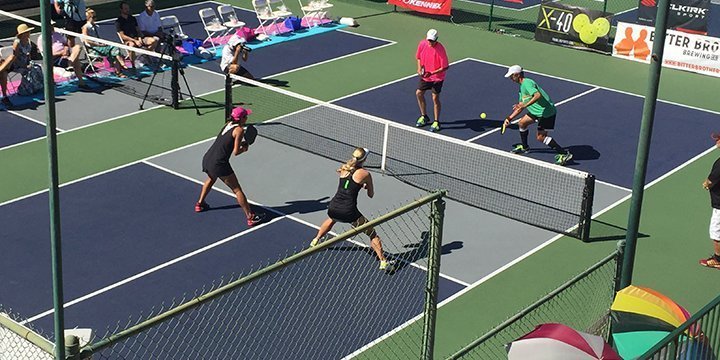 While planning for the 2018 pickleball tournament season, I thought it would be prudent to share this article that Alex Hamner and I wrote for Pickleball Magazine (Prize Money, Men & Women, Seniors & Open, Players Beware). Mainly, its just food for thought, but equality (or in this case in equality) hit home with us. This wasn’t “some time ago” it was 2017—last year. It’s always good to understand ALL the details of a tournament you sign up for – after all it costs you time and money – be smart and of course PLAY SMART.

Senior man vs. Open woman …. Pickleball’s first ever Battle of the Sexes took place this last summer. The location was Southern California’s Bobby Riggs Tennis & Pickleball Club (how appropriate was that!) where memorabilia from the 1973 Bobby Riggs vs. Billy Jean King match is displayed.

The players put themselves out there and gave it their all every single point. The crowd was not disappointed at the level of play and quality of entertainment. This event carried on the long-time national discussion of women and men, age and pay equality.

As all pickleball lovers know, the number of players, tournaments and events have increased exponentially. Players now have so many choices of where to play and what levels or categories to compete – WOW, how cool it that!  But with so many choices and opportunities comes our caution for players to beware. A lesson we learned is to read the entire tournament information and then you will have the facts to decide if that tournament is right for you.

For example, you may want to only play with people of your AGE yet find the divisions offered are by SKILL – or maybe it is unclear what the tournament director (TD) will do if the right number of players do not sign up; will you then be put into another division that you do not want? Read the fine print and if the information is not clear email the TD for clarification so there will be no surprises come tournament day.

Our example – last summer we participated in a big tournament offering prize money and both senior and open (non-senior) events. Once it came time for some of the winners to receive their reward there was none. There were many players (including ourselves) who did not clearly understand the tournament information and made assumptions as to the payout. The TD awarded $1,650 to each of the open men’s winners – that may be the largest to-date payout in the pickleball world for a gold medal– yet the open women winners received $500 each and seniors got zero. Pay equality amiss by both age and gender.

While we love how there are so many division options and cool locations to choose to compete in, this is your player beware – know the specifics and pick the tournaments that are “equal” to you.  All players, whether man or woman, under-50 or over-50, YOU have the choice to support or not support a tournament.

Note: In the pickleball world age 50 and above is Senior.