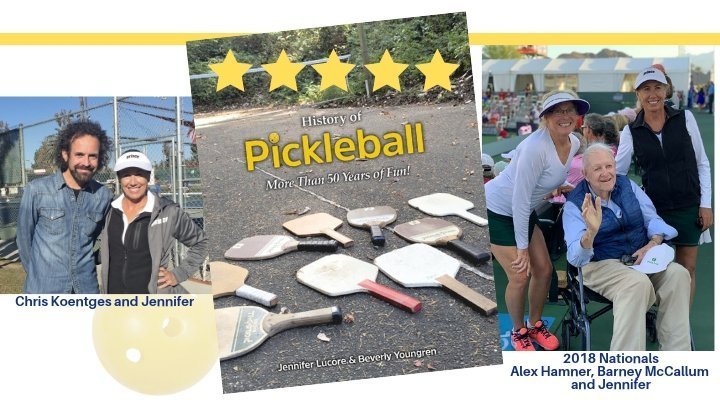 At the 2018 USA Pickleball National Championships, I met Chris Koentges, an ESPN writer and more, who was there researching pickleball. Of course, we joyfully talked about the history of pickleball and Chris got an autographed copy of my book. Enjoy his insight here:

Self-published histories of obscure sports tend to fall into one of two traps. If they’re not dumbed down timelines of events, such books can come off as bloated and smarmy—impenetrable to outsiders. Introducing their History of Pickleball, the first-time authors Jennifer Lucore and Beverly Youngren (daughter and mother) express reservations about the task they’ve signed up for. While they’re revered players within the game, they still find themselves on the outer edges of pickleball’s historic inner circles. They even go so far as to refer to themselves in the third person, asking: “Why are they the ones to write the history of pickleball? They don’t have a clue…but if not them, then who?”

In the process of addressing their fears, Lucore and Youngren subtly begin to evoke a chorus of pickleball’s lost voices. Not content simply to detail fifty years of history, the authors viscerally put us inside various backyards and cabins on Bainbridge Island in the 1960s. We feel the carefree optimism of summer. The chutzpah of inventing a game from scratch. Among this motley group of the game’s first characters, Lucore and Youngren zero in on two of the more important founders. A Washington senator named Joel Pritchard, who became the early face of pickleball, and his good friend Barney McCallum. Pritchard is the charismatic ideas guy, chummy with the intelligentsia of Cascadia, including the governor of Washington, who eventually builds a pickleball court behind the state mansion. McCallum is the details guy. He runs an envelope factory, which becomes just as important to the apotheosis of their new game as Pritchard’s weathered backyard badminton court. Together, the two friends aren’t just building a new sport, but an ethos.

Early on, McCallum tells Lucore: “Good games that survive are well-balanced.” This idea resonates through the book. “Barney viewed the game as a way for players of all skill levels to have a chance to get off the sidelines and play.” Over countless visits, he would emphasize to Lucore: “From day one, we fought the idea of big people, powerful people, dominating the game.” Above all, McCallum wanted pickleball to become the ultimate inclusive sport, “where girls could compete with boys.”

As simple as their game would appear—the rules were meant to fit on one page—its fringes were hazy and filled with competing lores. Lucore and Youngren bring their own deft balance, as they sift through what turns out to be conflicting historical accounts. The pair write like they play pickleball. Persistent, patient, always waiting for just the right opening to deliver their most surprising shots. (Impatient readers will be tempted to skip to a chapter called “The Name,” which addresses the different accounts of how “pickleball” got its name.) Whenever the confusion of this history begins to feel overwhelming, the writers diligently reset, confidently moving their way forward. As deeply as you fall for the colorful history of this game, you will fall for the warm conversation that evolves over months and years, between McCallum and Lucore. (Alex Hamner, Lucore’s trusted doubles partner, is often at the table for these chats.)

As Lucore returns again and again to Bainbridge Island, it’s no longer McCallum sharing the story of pickleball with the author, but the other way around. The moment she arrives, he invariably asks her, “What’s going on in pickleball? Have they changed any rules?” She’ll share the latest developments. He tries to wrap his head around this culture, which has not just taken on a life of its own—but is now a part of millions of lives around the world. In the end, Lucore shows us that this history of pickleball is just the beginning.

Chris Koentges writes about the improbable stars of overlooked sports for a variety of magazines, including The Atlantic Magazine, ESPN The Magazine, and Bleacher Report.

Thanks to Chris for his raving review of the history of pickleball! 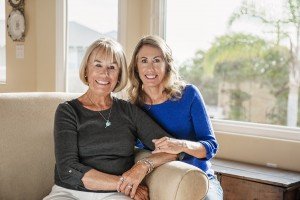 Beverly Youngren and Jennifer Lucore
authors of History of Pickleball – More Than 50 Years of Fun!

Share the pickleball history with your friends and family!

15 comments on “Raving Review of The History of Pickleball”